We interviewed our Lead Contractor, Tony to get insight into a small home addition that brought challenges to make the house structurally sound, as well as add space for this family of four.  His thoughts on this family's project could help guide you through your home renovation process and answer any questions you may have.

Tell us about the background of this remodel:

Our clients Keith and Tiffany had spent 10 years living in their forever home with their 2 school age children. However there were structural issues to the house that needed to be corrected, as well as some layout changes they wanted to make. Our homeowner Keith was focused on the house being strong and structurally sound.

We had previously added a portico to the front door -- a project we picked up after they had started with a previous contractor that did not work out. In that same year the family called us back to remodel the master bath, which they were very happy with.

What was the family's vision for the space in their house?

The homeowners wanted a more open floor plan on their first floor. The family room was divided, with a narrow view of the kitchen, and with the sagging 2nd floor over that space, it had to be addressed in the plan.

While their kitchen and hardwood flooring was only about 6 years old (previously renovated by another contractor) the family had issues with the usability of the space. They saw mistakes the previous contractor had made, like the ceilings weren’t flat, the crown molding wasn’t straight, and the range hood was a strange proportion. Our plan included some space adjustments and added cabinetry in the kitchen. 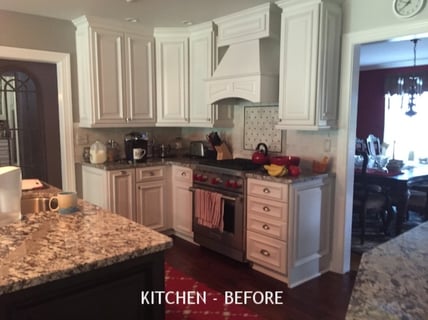 What were the structural issues that needed to be addressed?

The family room ceiling was sagging, as a result of a previous owner converting a screened in porch to be the new living area. They had expanded the space without designing for and installing the right size beam. The 2nd floor was not properly supported, so it was necessary to put in a steel beam to support the house.

In the process of demolition of the family room and old laundry room, we found rot in an exterior wall and had to tear it down and rebuild it, which only caused 1 day delay.  The homeowner never felt like there was good insulation and it was drafty in this section of the house, so he was happy to have it done right.

Also, Keith and Tiffany complained that their old floors were bouncy. We found that all of the subflooring was 1x4 plank subfloor and wasn't nailed very well. We replaced about some of the floor joists, and did work in the basement to take some of the bounce out of the floor.  It was a lot of work, but with the new hardwoods laid on top, it made a big difference in the in making the house feel more solid. 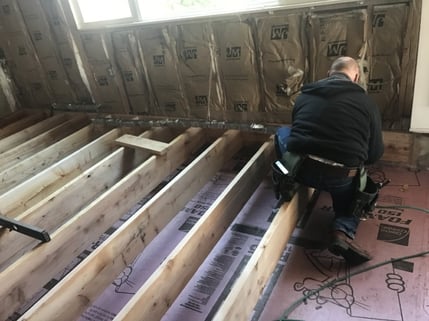 What kind of accommodations did you make for the family during construction?

We work hard to keep the family’s space functional during construction for as long as possible. In this case we kept their kitchen sink running for a long time until we absolutely had to remove it. Also, laundry was a big deal for them because of the kids’ sports, so we left their washer and dryer plugged in and functioning in the middle of the kitchen while we built the new laundry room. 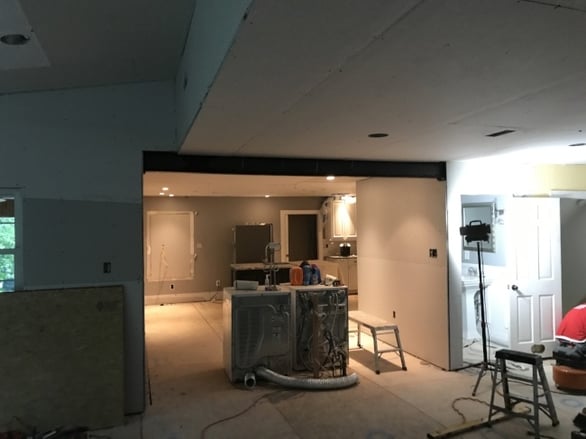 Are you considering a remodel, so you can stay in your neighborhood, but have a better use of space in your home? We consult with you to come up with the right solution for your budget and your needs.

CONTACT US to start the conversation and see if we're the right fit for you.

Tell us about how you changed their spaces.

Besides fixing the structure of the living room, we also built a 1-room addition off the back of the kitchen where they had a small covered patio. The added space was only 12’ x 16’, but it allowed them to have new usable space for a mudroom and laundry room. We’re pretty excited about the built-in organizer in the mudroom to meet the needs of this sporty family. Now all the kids' cleats and gear has a place. And there is a beautiful granite countertop that spans the top of the washer and dryer. 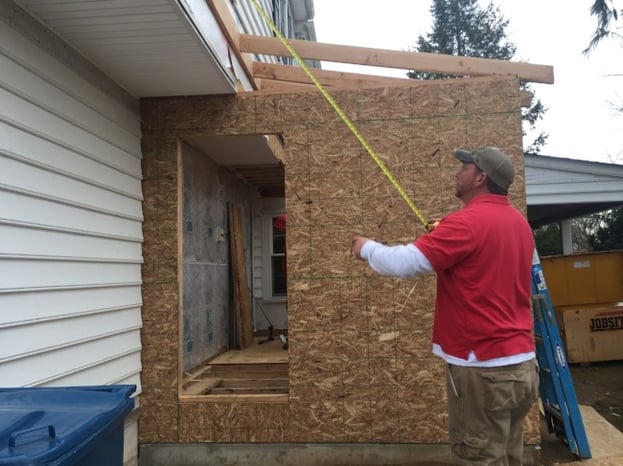 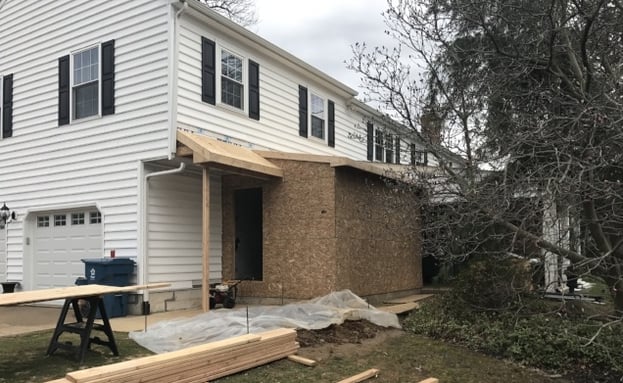 This area also allows them to now have a side entrance. We added a 5 ft section of roof and an exterior door. 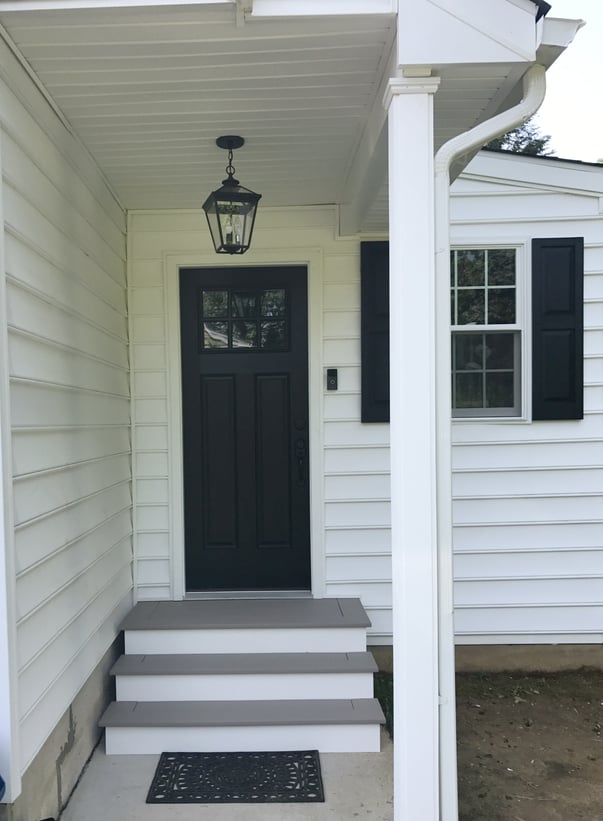 Originally the kitchen had a narrow hallway going to it and we opened the space. We took over and existing small laundry room to expand the kitchen and open it into the family room. We took the kitchen island and changed its direction to open the space up. We added 6 new cabinets on a new wall to match the previous cabinets - you would never know they were added. The new pantry gave them a ton of storage space. 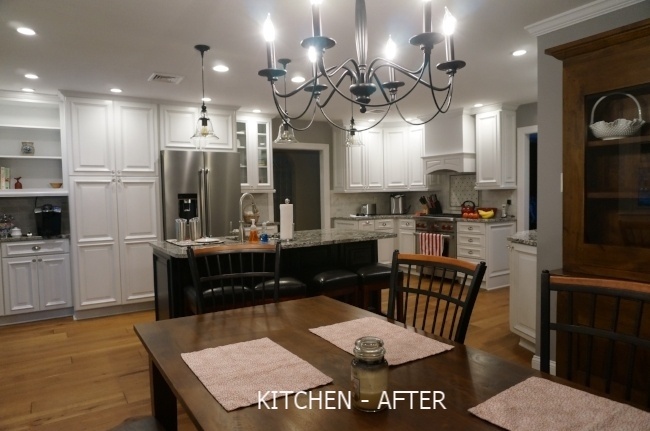 What was your build schedule?

We started in March, and wrapped up beginning of June.

Did you have any setbacks?

We had a delay early on due to the weather - we had dug the foundation for the new laundry room and a late March snowstorm came and then it got cold so we couldn’t pour concrete. The plan was to do the foundation first, and then go into working in the main house, but we had to flip the schedule until the weather warmed up.

What was your favorite part of this project?

The living room had a brick fireplace, and the homeowners had wanted to tear down all the brick around it, and replace it with a smaller stone, taking up less space. However I and our team thought the brick really complemented the house, and came up with a treatment to keep the brick, and create built-in shelves on both sides of the fireplace, with the brick visible through the shelves. 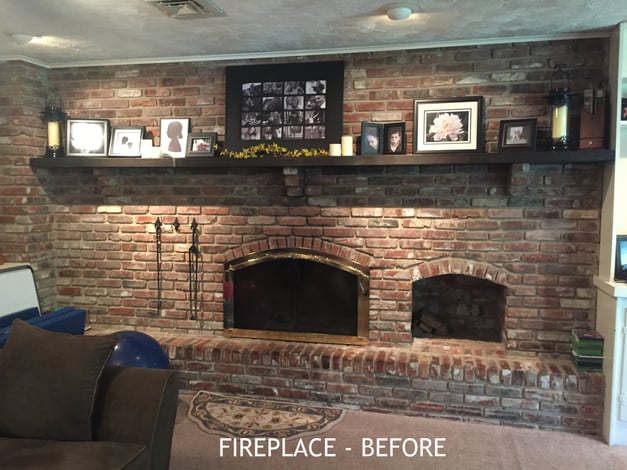 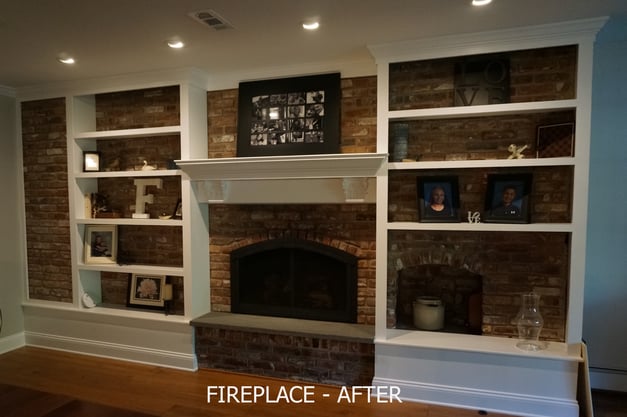 What was the homeowners' feedback?

They were extremely happy -- they had been there 10 for years, and were excited to experience their home in new way.

To view more of our home addition projects,
click to view our Additions Portfolio